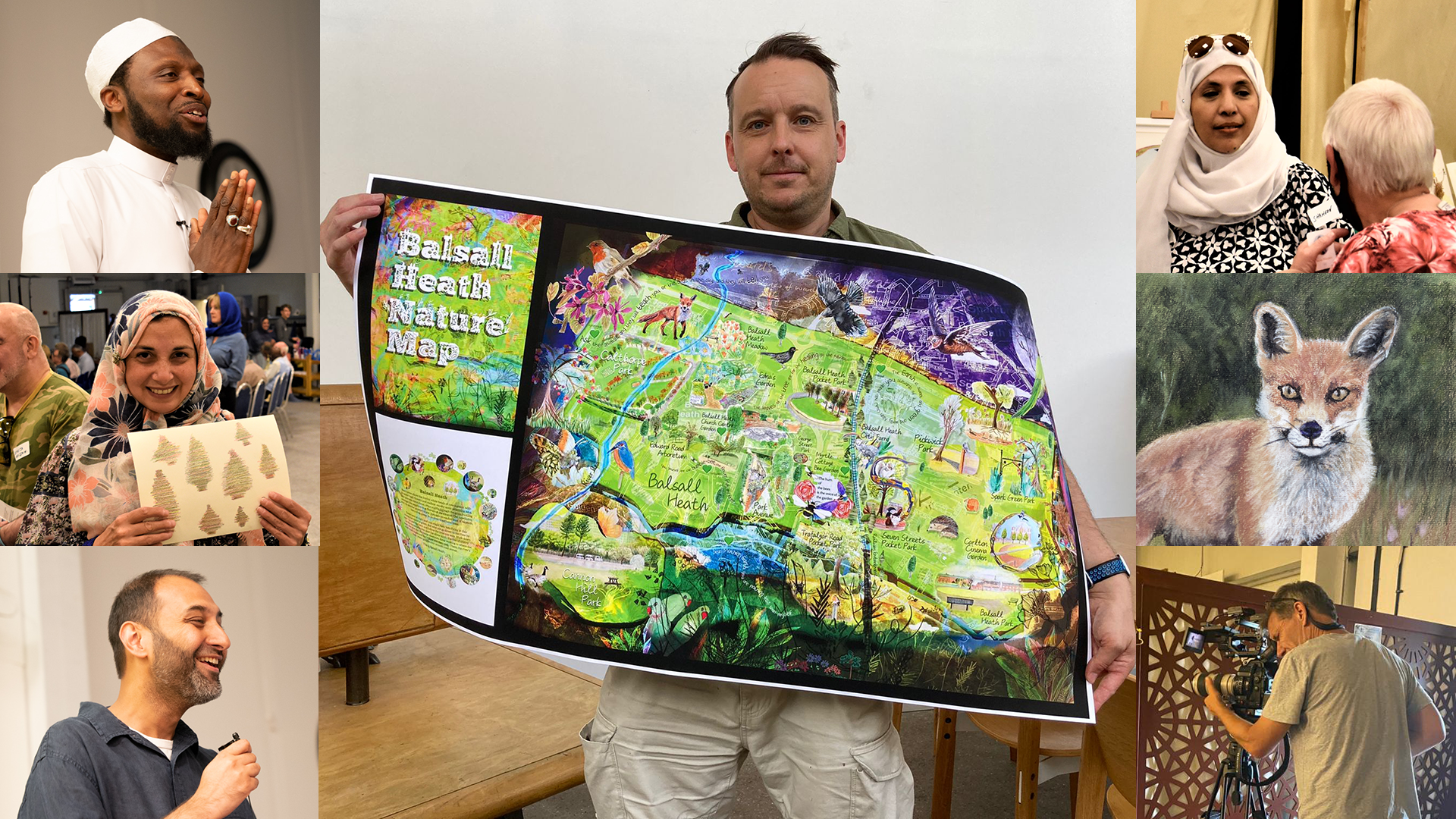 We did it! We made Balsall Heath Nature Map!

It was a glorious evening, attended by almost 130 people of all ages and faiths, each with different connections to the neighbourhood. Retrofit Balsall Heath, a radical community initiative which has won funding to fully insulate 700 homes in B12, was launched that evening too.

A film crew from Al-Jazeera came to capture the event for their Earthrise programme, to be broadcast in November.  And The Mosaic Road, a community arts photography project based in the Ort Café, Moseley Road came to take portraits of Balsall Heath residents.

Here are some highlights from the speakers:

“Working on this project was a fantastic opportunity to get to know the local area, the local wildlife, be part of a brilliant team who are just committed about improving the environment. It was right up my street.”

Then look again and yet again. Your sight will fall back to you, dazzled at the splendour of God’s creation. (Qur’an)

“What’s been really lovely has been seeing lots of different people’s vision of the area coming together into one coherent product. We’re used to looking at maps that are quite commercially driven. It’s got the McDonald’s there and the next Costco there. What I love about this map is that it’s a snapshot of what’s there but also, there’s kind of an aspiration of seeing more of nature in our urban areas.”

And I think it’s particularly challenging to know ourselves to be people of the earth when we can’t see it, when we’re in a very densely populated area. It’s a bit easier in pretty rural areas. So I wanted to do something about beginning to heal that relationship and this is where the arts absolutely come into their own.

And there is no creature on or within the earth or a bird that flies with its wings except that they are communities like you and we have not neglected in the register a thing the unto their Lord will they be gathered. (Qur’an)

“This is quite important to me because here the Almighty is referring to biodiversity as communities.

And it’s so great to see that the interfaith community has come together in Balsall Heath to celebrate that. I’m involved in so many interfaith initiatives but nothing like this where we actually genuinely have taken nature and made it about nature and not made it about us. It’s nature that’s brought us together not the other way round.”

“Thirteen years ago, some of you will know, that me and my family had a great opportunity to do some work to our house in Tindal Street, Balsall Heath. It’s a little two-up, two-down Victorian terraced house. We’ve extended it a bit.

I’m proud that it’s the first ever UK zero carbon retrofitted home but I am not proud that we have not yet succeeded in getting all the homes of Balsall Heath retrofitted to the same standard.

But I am pleased that the City Council have been listening to us and we have funding now for 700 homes in Balsall Heath to start on this journey to cut their bills, to reduce their carbon footprint.

So what retrofit means is to take an old house – and we’re looking particularly at the old Victorian houses of the Seven Streets area here and of the older parts of Balsall Heath – to insulate the walls, the floors, the roofs, the windows and the doors and to cut the bills in those house by 60 to 80 per cent.

This is a really exciting thing to do in the context of working together as a community because I have gone – and Kamran and others have gone – to Birmingham City Council and we have said that we in the community in Balsall Heath have been discussing these ideas, these collaborations, for many years in this area. We understand the needs. Many in these Mosques and the Church are connected to those in foodbanks who have real need. We know who the people are in our community.”

“This is the point of departure. It’s a call to responsibility. It’s a call to duty. When we go out of this place this afternoon, all of us, we should be thinking, what are we going to do to ensure that this Balsall Heath Nature Map manifests in our houses and whatever we do within the community?

In the creation of the earth and the heaven and the alteration of the night and the day there are signs for the people who understand. (Qur-an)

It simply means nature is of great importance and if we truly want to see God or feel his existence we should look at nature or the environment. Without nature there is no one who can claim to be able to get to God Almighty.

I stand in front of you this afternoon, humbley, to invite one an all, beginning with myself, do something practical about our nature, especially in this beautiful area of Balsall Heath. What we see today is the result of collaboration between different communities and I believe if we come together, we can take this to the next level.”

The evening concluded with a delicious meal, generously provided by Al-Abbas Islamic Centre.